The countdown is on, with just under 70 days to go until the official start of the inaugural season in the spectacular off-road race series Extreme E. On April 3rd and 4th this year, the ODYSSEY 21 electric SUVs will do battle for the first time in the Saudi Arabian desert. By choosing settings close to endangered habitats, the Extreme E series aims to raise awareness of climate change among motorsport fans worldwide, as well as among politicians, residents and local authorities at the venues, encouraging them to step up their efforts to limit global warming to 1.5 degrees Celsius. Saudi Arabia is home to the largest area of continuous sand in the world. It is hard to think of an environment that appears so inhospitable to life – and yet this is also a unique ecosystem very much worth preserving.

The racing will be staged around AlUla, an oasis city some 150 kilometres south-west of Tayma and 400 kilometres north-west of Medina. Also not far away is the Suez Canal, which links the Red Sea with the Mediterranean through the Isthmus of Suez. AlUla stands on the site of the Biblical city of Dedan. Once the capital of the Kingdom of Lihyan, it served as the hub for various ancient trading routes and holds great cultural and historical significance as the centre of numerous archaeological sites. Mada‘in Salih, for example, became Saudi Arabia’s first UNESCO World Heritage Site in 2008. But global warming is accelerating the erosion of the 110 monumental tombs, which were cut into the sandstone around 2,000 years ago. “The region has a breathtaking beauty,” says Eddie Ryan, Marketing Director at BestDrive by Continental . “However, it also creates very tough conditions; the extreme heat, very low humidity, wind and fine sand will provide a unique test for the drivers and their equipment at this first race of the series.” 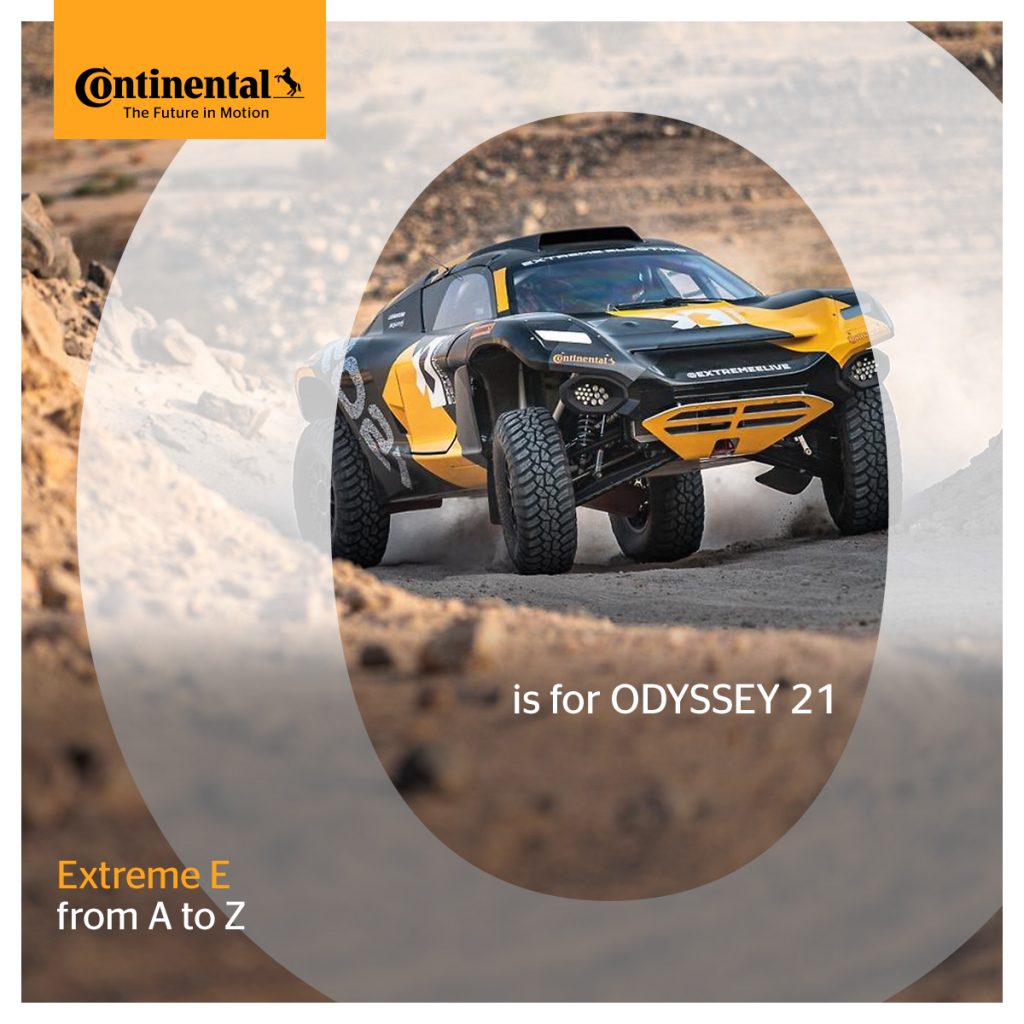 The teams will then head for the banks of Lac Rose – also known as Lake Retba – near the Senegalese capital Dakar. The salt content of the lake is similar to that of the Dead Sea, and it owes its remarkable colouring to the presence of specific bacteria that produce red iron oxide. “This is an extraordinary place,” says Ryan. “But due to its proximity to the coast, it is sadly under increasing threat from climate change.” The UNESCO World Heritage Site is located less than one kilometre from the Atlantic, separated from the ocean by just a few rows of dunes and that strip of land is getting thinner all the time. “The coastline here is currently losing three to four metres of land mass each year due to rising sea levels,” says the BestDrive marketing director. “And a key contributor to this is Greenland’s melting ice cap.” In the lead-up to the Extreme E race weekend in Senegal, the organisers have teamed up with the local authorities to launch an environmental protection project aimed at cleaning up the coastline. In addition, one million Mangrove trees will be planted out over an area equivalent to 112 football pitches.

On May 29th and 30th, the dunes, salt flats, gravel, rocks and the corrugations on the narrow off-road sand routes between Lac Rose and the Atlantic coast will provide a stern challenge for the drivers, teams and cutting-edge ODYSSEY 21 electric SUVs alike. As at all the Extreme E locations, the routes are designed to incorporate existing obstacles and features in the racing – with no need to adapt the natural setting. Damage to the environment is avoided as a matter of principle.

Next up after the desert and ocean stages comes ice. On the last weekend in August, the Extreme E series will switch its attention to Greenland, the frontline of the global climate emergency. Around 70 per cent of the total public energy supply here now comes from renewable sources, and that number is still on the rise. That said, nowhere on the planet are the unprecedented effects of global warming more evident. Greenland has lost 600 billion tons of ice in the last year alone. 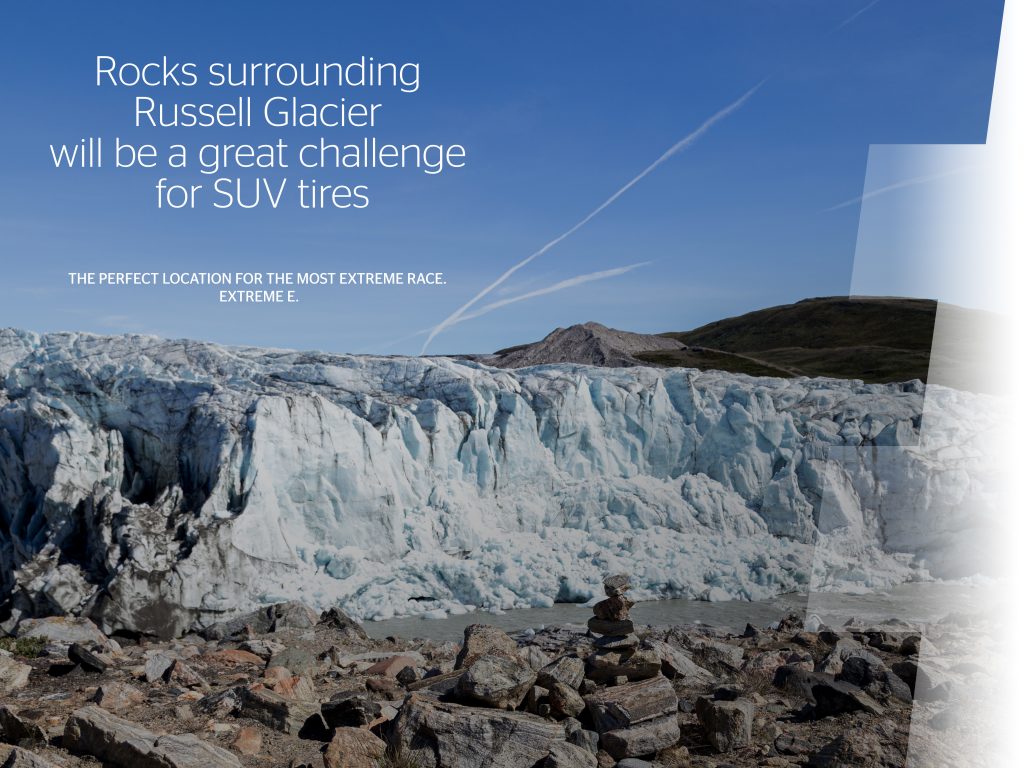 Hosting the battle for points and places on this leg of the Extreme E journey will be Kangerlussuaq. This settlement, around 50 kilometres north of the Arctic Circle, is situated at the head of the approximately 163-kilometre-long fjord of the same name. It is located much further inland than any other settlement in Greenland. Under scientific supervision, an elongated sandbank of what is known as rock flour, which had been carried down naturally by the glacier over the years, was selected as the race course.

The penultimate stop-off in this inaugural season of Extreme E will be the Amazon rainforest of Brazil in October. The continued survival of this area is threatened by a whole range of serious problems – of which overexploitation and slash-and-burn land clearance are currently among the most topical and urgent. “The loss of tropical forests is one of the greatest global challenges of our times,” highlights Ryan  “Brazil is at the centre of these challenges.” The Extreme E venue is Santarém in the state of Pará – halfway between Manaus to the west and Belém to the east, at the confluence of the Rio Tapajós and the Amazon. The city dates back to 1661. “It’s economic upswing began in the mid-19th century and continued into the early years of the 20th century, as the region – like the Amazon as a whole – benefitted from the soaring demand for rubber,” reflects the BestDrive Marketing director. “The architecture of the older parts of the city bears witness to this boom. Today, the rubber trade only plays a minor role in Santarém, with the local people now relying mainly on cattle farming and fishing for their livelihoods.” The races will be held in a region which has already seen extensive deforestation and has been badly affected by fire. Among the aims of the Extreme E organisers is to ensure that an area of rainforest the size of the event location is replanted each race season. “From a sporting perspective, the teams will encounter the highest temperatures of the season in the Amazon,” says Ryan. “As will our tyres, of course.” The mercury rises to 32 °C during the day, but at least humidity levels here are not quite as high in October as in many other months.

The first Extreme E champion will be crowned in December – when the season finale takes place outside Ushuaia in Argentina. “Ushuaia“ is an indigenous word meaning something like “bay looking into the east”. Located on the Beagle Channel, Ushuaia is the southern-most city, not only of Argentina, but in the whole world. The Extreme E competitors will race at Tierra del Fuego National Park, located approximately 18 kilometres from Ushuaia and home to the Glaciar Martial which is threatened by climate change. “On the basis of data collected between 1960 and 2006, and with the help of a climate model, researchers have calculated that the glacier may have melted away entirely by the beginning of the 22nd century,” says Ryan. It’s a bleak outlook, and one shared by other glaciers. For more than 120 years the World Glacier Monitoring Service has been gathering data on changes in glaciers worldwide. Their work has included observing reference glaciers in nearly 20 different mountain regions across the globe. The current rate of global glacier melt is unprecedented. Experts have identified global warming due to climate change as the principal cause.

Being involved with this “Green” programme shows that as a company we can try to make a difference in the environmental area and help play our part in reversing the impact of the last 50 years.

BestDrive by Continental – You Drive, we care.